Farming High in the Hills

Farming is in Rob Kirk’s blood. He has been living or working on farms for most of his life. Now Rob and his wife Adele, farm on 580 hectares of hill country at the head of the picturesque Pohangina Valley, whilst living on a small block at Ashhurst on the outskirts of Palmerston North. Rob has followed a unique path that finds him running sheep, beef and “wild” deer on a rugged but pretty special piece of farmland.

You could never say that Rob Kirk does things by the book. You’ll not find many farmers in New Zealand that sold a dairy farm in the early 2000s to become a sheep and beef farmer, but Rob did! Whilst there have been some tough times and the occasional flicker of doubt about his decision, he is adamant it was the right move.

As Bruce, Rob’s father, was a teacher working at different schools during his career, he shifted around a lot in the 1970s and 80s. This meant Rob grew up mostly on lifestyle blocks. At the age of 14, he was helping his father and mother, Adrienne, raise calves and finish bulls at Linton.

Farming became a passion and as soon as he left school, Rob knew farming was to be his game. On his father’s advice, he built up funds through share milking and at the age of 23 purchased his first farm, a 40ha block next to his parents and went into partnership with them. Over the next 13 years, Rob and Adele added small blocks until they were milking 700 cows. Rob’s systems on the dairy farm give an insight into some of the unconventional ways he and Adele worked.

He did not mate his cows to dairy bulls; instead he mated them to Simmental beef bulls. For replacements each winter, he bought a dairy herd, selling on the cows he did not need in spring. It was a lucrative system that was reliant on Rob’s eye for a deal. 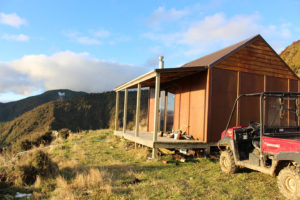 Then in 2003 came the decision that some would say was unconventional and certainly went against the popular thinking of the time – Rob and Adele sold their cows and Fonterra shares, moving into beef and raising dairy heifers.

They also began a search for a hill country farm which now sees Rob and Adele farming sheep and beef at their block of land in Ashhurst as well as Umutoi, which backs on the Ruahine forest park.

The 580 hectare farm at Umutoi is managed by Steven King and, as Rob puts it, “I work for him”. It is a highly productive piece of farmland and is currently carrying 5300 stock units. This doesn’t include the abundant wild deer roaming in the bush. Rob is working closely with the Horizons Regional Council and is using their Sustainable Land Use Initiative to help guide development on the farm.

Fencing in this sort of environment is difficult and provides many challenges. Over the past nine months, a full-time fencer has completed 5km of hill fencing with Rob’s post of choice for this job, the Rounded Superpost® .

As Rob puts it, “The conditions here can be pretty unforgiving, so you need a fence post that is strong and durable. Goldpine’s Rounded Superpost® is ideal. We have driven over 400 and I think we have broken only one! They are fantastic value for money!” 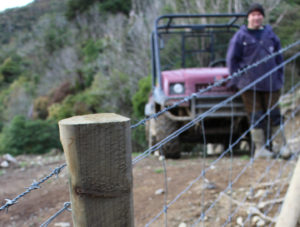 Much of the recent fencing has been to keep wild deer out of the valuable farmland rather than keeping stock in, and whilst the deer are considered a bit of a pest at times, they also provide Rob the opportunity to partake in a favoured pastime, hunting. Rob and a few of his mates have built a hut high in the hills, which is used as a base when they are on “deer control” duty. Check out the photo below of the wild deer that appeared out of nowhere when we visited Rob on his farm recently.

The last 12 months have been both challenging and rewarding for Rob and Adele. They have just come through an unusually dry summer, however sheep and beef returns have been positive. Rob sees plenty of opportunities on farm in the years to come. “Compliance costs continue to rise and there’s a lack of consistent returns due to the dips and highs in commodity prices,” Rob stated, “however we will continue to farm our way and hopefully continue to improve our returns, whilst having a lot of fun at the same time.” 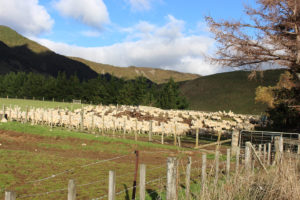 When Rob is not working for his farm manager, or controlling the wild deer on his farm, you might just find him in South East Asia, not on holiday, but volunteering on Project Indo-China. This is a project run by a Non-Governmental Organisation aimed at seeing lives changed through education, medical care and general support for some of the world’s most vulnerable.

Rob Kirk, an unconventional, deer-hunting farmer, driven to succeed and driven to help others.